Decent conversion of Sydney Development's (Evolution) very early World War II flight simulator, released for the C64 in 1984. Despite primitive CGA graphics, The Dambusters is surprisingly complex for its time, offering multiple views, control options for the cannons, and various instruments on an authentic-looking panel.

Although you can only fly one plane in the game, it's a very special plane that is rarely modeled in flight sims: the Lancaster bomber, a fearsome bomber of the British R.A.F. The plane's place in aviation and war history is secured by the heroic deeds of an R.A.F. squadron who bombed a number of crucial dams in Germany in WWII, earning the name "the dambusters." Your mission is to follow in these heroes' footsteps, although you must contend with various air hostiles on your way to the dams. Flight handling is excellent for its time, and the multiple views and weapon options foreshadow MicroProse's excellent B-17 Flying Fortress years later. Definitely a classic, albeit forgotten, sim that deserves to be mentioned alongside BAO Software's classic Jet and many others. 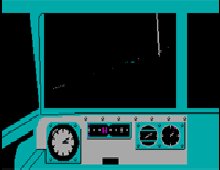 People who downloaded this game have also downloaded:
Conflict in Vietnam, Clash of Steel, Defender of the Crown (EGA Version), Battle for Midway (a.k.a. Midway Campaign), Carrier Strike: South Pacific