Cyber Chess is a decent clone of Interplay's Battle Chess, although with far inferior graphics and animations, even if it was released a few years later. The pieces are cast as sci-fi kings, queens, and robots, fighting for survival with chess moves as the only weapons. The game is played from a top-down (i.e. bird's eye view) perspective, with a small window at the lower right of the screen dedicated to showing the current piece you have selected. The computer AI is decent, although there is no way to change difficulty level. The game does include minimal options, such as move hints and player history that keeps track of your games. Overall, a nice low-budget title that does nothing better than commercial chess releases... although not much worse, either, except for the lack of options. 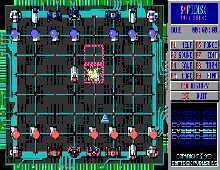