This freeware game by Spanish software company Runt time puts You in role of one of two cow herds - gray and brown cows. Select Your side and crush the other one. Very funny, to be honest. And the action points...they are called MUs instead of APs. Heh heh.

As you might notice with this game the title is a bit different than other games. This also means that there is a chance (risk?) that the actual game might be weird and it can't be truer than with Crazy Cows. The game is a turn based strategy and you start by choosing one of the two troops available: grey or brown cows. After that, you can start the game.

On the right hand of the screen you have a bar, where you can find a picture of the cow selected, and a red and a green indicator, and below these, various buttons. Cows can be killed in many ways including if the energy of your cow reaches the minimum, if your cow puts its shoe on a mine, your poor animal will fly on peaces and quite a few more ways. There are seven kinds of different cows for each troop and they are Crazy Cow, Shotgun Cow, Bazooka Cow, Mine Cow, Cleric Cow, Ninja Cow and Scuba Cow.

If you want to create your own maps to play battle mode games, you can do it with the Crazy Cows Editor. The editor is a very simple and easy to use program that will allow you to create any kind of map, with the enemies and backgrounds you want. Crazy Cows is overall a decent strategy game with a very funny theme. Both the graphics and sound (including the cow voices) are well done and quite funny as well.

As far as I can remember this was the first game I ever downloaded - we all got to start with something ;) It's shareware and it's LOTS of fun. The concept is something like Warcraft light, you lead a group of cows against another group of cows. Sounds dumb, eh? Well... imagine cows dressed up like Ninjas, cows with Shotguns, Bazookas etc. hehe, sounds more interesting now? Turn on the sound and you'll laugh your ass off (I always knew cows would talk like that!) - this is a good laugh and a really nice game. There isn't much to explain, after one or two minutes you get the idea of weapon-collecting and enemy-cow-shooting and/or slaughtering. But don't think they wouldn't fight back! If there was a rating for pure fun this would get a full rating.

Crazy Cows is a fun, tongue-in-cheek turn-based strategy game that pits gray cows against brown cows in a battle for survival. Your goal is to annihilate all opposing cows on the map with your cow soldiers. The gameplay is turn-based but timed: similar to Space Hulk, you have a limited time each turn, so you must use it wisely in planning your moves. Your cows start out empty-handed (empty-hooved?), but they will soon find weapons scattered on the ground. There are 6 types of weapons: shotgun, bazooka, katana sword, mines, kooathilie stick (try saying that three times fast), and scuba gear (which lets your cow breathe underwater). Anything your cow picks up will be equipped automatically, and any existing weapon will be dropped on the ground. Although gameplay mechanics are simple, Crazy Cows takes into account a few realistic factors such as terrain effects. Travelling through grass, for example, is faster than through the forest, while forcing your cows to go through mountains or desert will decrease their health. Unit production is a very simple affair: any farm you control will produce a cow at random, so the more farms you control, the more cows you will get.

There are two modes to choose from: War and Battle. The War mode is essentially a full campaign mode that comprises sixteen levels that get progressively harder with more powerful cows. Battle mode is a way to play a single map, including custom ones you can create using the excellent editor included in the package. The Battle mode also allows you to play against another human player.

With simple gameplay and decent graphics, Crazy Cows is a nice ?light? strategy game that Warcraft fans should take a look. It?s neither sophisticated nor epic, but the humor (calling Action Points ?MUs? instead of ?APs? for example) gives the game plenty of unique charm that will keep you entertained for a while. Recommended! 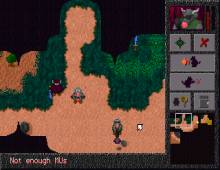