Not to be confused with the more recent MMORPG of the same name, Black Moon Chronicles is a fun fantasy real-time strategy game based on "Chroniques de la Lune Noire," a French comic series of the same name. Developed and published by Cryo Interactive, the game is reminiscent of Warhammer: Dark Omen, except it is not as compelling. Veteran reviewer Tim Chown says it all in his review:

"...[The game] can be played in two ways. You can either play a skirmish game against the computer, choosing the forces and maps to play on, or you can embark on a long campaign. Your persona in the campaign is Wismerhill, a warrior-mage character who gains experience and with it more hit points as the campaign unfolds. You start with a short "introduction" mini-campaign, then after a handful of missions you're forced to pick which faction you'll fight with. In my playing time I sided with the Black Moon, commanding hordes of orcs, with proficiency in undead. Each faction has its advantages, be it area effect spells, or immunity to morale checks. Playing a few skirmish battles, where all units are available, gives a good taster for the abilities.

The campaign is linear in nature, with five or six missions per map, each of which usually has to be done in order. Having chosen your faction, you can spend the money you earn from missions on either buying new troops or spending on your castle to "research" new unit types, spells and abilities. You'll sometimes get choices in missions, through dialogue screens, but these are generally somewhat limited and don't seem to be of sweeping importance to the campaign as a whole. There is no building to be done in the tactical battles, instead (as per Shadow of the Horned Rat) you compose armies (regiments), move them around the map, and engage in battle when you move to a mission location or when you meet another army.

The tactical battles lie at the heart of the game. The linear campaign, strategic army development angle and the relatively decent storyline help to keep you wanting more. Each soldier in your army has unique experience levels which determine their strength (which unfortunately seems bugged somewhat - in one mission all my troops advanced to 2000 exp, even those who did nothing). ...The novel tactical feature is the way armies are deployed as regiments, possibly multiple regiments per battle, with each section starting as a separate formation on the battlefield, complete with standard-bearer. The standard- bearer is important for morale - weakened sections can rout from the battle to be lost forever unless rallied by a hero. While the tactical battles are quite fun, they're also the weakest part of Black Moon Chronicles. The lack of fog of war may turn off some players, but that's not a huge issue.

Black Moon Chronicles could have been a great game; it certainly came close. The fantasy setting is unique, novel, and very well conveyed through some excellent artwork and very strong music tracks. The strategic aspect of the game is also good, with the need to balance investment between new troops and research. Everything is pretty decent and enjoyable until you enter the tactical battles. There, you'll find that the interface is very basic, the AI and pathfinding very poor, and the tactical challenge determined only by the number of special creatures or spellcasters you face.

The game could have done with another month or two of work on the AI and interface (a point borne out by the token interface additions in the v1.3c patch, which also adds some unit stat tweaks and a battle debrief screen). As it stands, Black Moon Chronicles shows enough promise to only make you all the more frustrated that the critical battlefield element is as weak as it is. A fun game at times, but it could have, and should have, been so much better." If you enjoy fantasy war/strategy games with much more emphasis on the story than challenging AI, this underrated RTS that is virtually unknown outside Europe is worth a look. 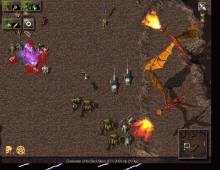