This abstract wargame, like The Pure Wargame after it, was obviously "rushed out the door" long before it was ready: the game was full of bugs, uninspiring gameplay, and incomprehensible lack of logistics (a dinosaur unit in the game causes as much damage as a 20th century howitzer!). Which is a shame, because the premise of the game is refreshing for a wargames: as potential leader of the earth's army against the aliens, you are sent back in time to fight famous historical battles to prove your worth. Recommended only for those who want a complete QQP collection :) 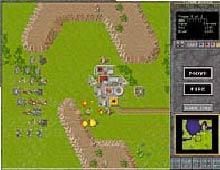