The gameplay is easy to learn, but has enough nuances to keep it from being a simple hack 'n slash like the action sequences in Hillsfar. You start the game by choosing the character class and race you want to control from dozens of available archetypes including human wizards, elfish archers, dwarven warriors, and many others. The main menu also shows you the keyboard layout, so you can refresh your memory about the game's basic commands - a nice touch.

After minimal setup, you will then be taken to the main game screen, where you will control the action from an isometric perspective, and moving your character with the keyboard. This is not a turn-based wargame: more of a furious, kill-or-be-killed game, but with considerable emphasis on strategy. You can issue simple commands to your units ("rally," etc.), tell them to march and attack in certain formations, and use a "parley" screen where you can buy or trade for necessary items or buy your way through a heavily defended mountain pass. The game is quite a lot of fun, although units with ranged combat ability seem to have an unfair advantage over warriors and wizards (who never seem to be casting any helpful spell, at least not on my watch).

Overall, Battlemaster is a fun and pleasant action/strategy hybrid that will appeal to fans of "light" strategy games and games lik Rampart. Worth a look, especially as an early effort to combine elements from different genres into a new gaming experience. 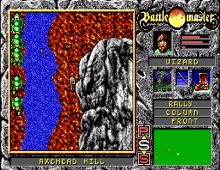