One of Avalon Hill's earliest games for the PC, B-1 Nuclear Bomber is a simplistic wargame that lets you fly a B-1 bomber on a mission over the Soviet Union. You must fly through stiff Russian defenses to the target city, bomb if and return home. Your computer controls the soviet MIG fighters and SAM's, and you must rely on electronic counter measures and self-defense missiles.

Similar to other games of the era, B-1 Nuclear Bomber was coded entirely in BASIC. But unlike classic BASIC games such as Dan Bunten's amazing Cartel$ & Cutthroat$ that push the envelope of the language, B-1 Nuclear Bomber is one of the worst of the bunch. As M. Evan Brooks observes in his synopsis, "its play mechanics are embarrassing in the contemporary market; in fact, its play mechanics were embarrassing when it was initially released. A virtual X-Y axis game of nuclear "bombs bursting in air"." Worth a look only if you are a nostalgic wargaming fan. 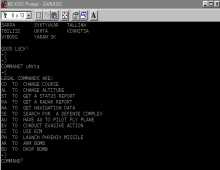