Ancient Art of War in The Skies, The

In 1992 MicroProse published the brothers' last game in the series, The Ancient Art of War in the Skies, which disappointed fans because it introduces arcade elements into the game, isn't as deep as its predecessors, and is riddled with bugs (sounds familiar?). Although it's not the perfect ending to a great series, The Ancient Art of War in the Skies nevertheless offers hours of fun with a staggering number of scenarios, plus cool digitized voices of your opponents. Opponents you will face include Kaiser Wilhelm II, General Foch, Lord Kitchener, Sun Tzu / Albert Ball, George Guynemer, Oswald Boelcke, Lou P. Deloupe, Baron Manfred von Richthofen (aka The Red Baron), Rene Fonck, Mick Mannock. Wingman AI is none too bright, but they do help you out in tough times. Overall, not a stellar finish to a classic series, but is still worth a look especially for casual strategy gamers who don't mind arcade elements in their games. 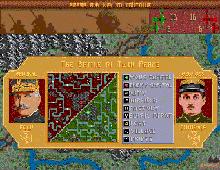 Ancient Art of War in The Skies, The screenshot