Wreckin' Crew is a decent PC conversion of an underrated PlayStation game of the same name, which was a result of 2-year intensive work by Telstar to make a better cartoon racer than Mario Karts. To a certain extent, their efforts paid off: there are far more gameplay features and options here than any other "kart" game I have seen, although the user interface and car handling leaves a lot to be desired.

Similar to other "cartoon racers" such as BC Racers, Wreckin' Crew is a tongue-in-cheek racing game that puts more emphasis on wacky gameplay than realism. Pick a hot-rod and driver of your choice, then it's off to blast your opponents off the tracks using a wide range of crazy weapons including body bags, lighting bolts, and even live chicken. Each of the 10 characters you can choose from looks weird, and acts even weirder. You can select a pair of Siamese twins called Cain and Able, the genetically created creature called "I.Q," an old woman, a circus trainer, an obligatory brat, and many more. Better yet, in "Hot Rod" mode, each cahracter comes equipped with 3 special weapons. The tracks (10 total in the game) are equally crazy, with many secret short-cuts, magic teleporters, and dozen of different power-up types you can pick up along the way.

The game is more difficult than Mario Karts because the rival racers get better over time, as you win races. You will soon notice the opponents starting to use short-cuts and teleporters. Unfortunately, I find the controls in this PC version fidgety and too sensitive, meaning each car is very hard to control.

With 10 tracks, 10 racers, and a huge variety of weapons and vehicles, Wreckin' Crew gives great value for money. Once you have completed all standard game modes, you can unlock a cool "Mirror" mode that lets you play all of the tracks in reverse. There are also many secret characters and tracks that can only be unlocked by progressing through the various game modes. Too bad this astounding array of features is not matched by solid car handling - it just feels too unwieldy for me even after hours of trying. Expert racers will probably have a great time with this obscure game, but the rest of us casual drivers may have to look elsewhere. 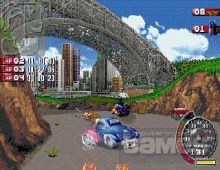