Wilson ProStaff Golf is a hugely underrated golf game by Novotrade, published by Konami. It is unfortunate that the game is not as well know as big-budget titles such as Links or Jack Nicklaus series, because Wilson packs enough excellent gameplay to attract golf fans, both novices and experts.

In addition to the usual plethora of options one would expect in a golf game, Wilson introduces several new features that are well worth a look. The best of these is the focus on competition styles: in contrast to games such as Links that tries to replicate tournament conditions, Wilson focuses on various kinds of friendly competition that amateur golfers enjoy. There are various team modes, including best ball, straight scramble, drop out scramble, straight skins and many more. The gameplay itself is also innovative: in addition to the familiar "swing meter," the game offers a moving cursor that appears on the ball right after you use the swing meter: this is used to determine where on the ball to hit. Although a bit difficult to learn at first, this is an excellent way to make specific shots, including curves. The graphics are pleasant and more than adequate, although sound effects are lacking.

Overall, I found Wilson ProStaff Golf to be an enjoyable "light" golf game. Too bad the game only has one course, but the good variety of competitive options helps enhance longevity of the game. Highly recommended, especially for anyone looking for a casual golf game that has no pressure of a competitive tournament.

I think I'm not exaggerating if I say most of you probably have never heard of this game. And that's a big shame... If you haven't figured it out yet, this is a golf game. Not a very heavy kind of golf game, just one you play for a bit of fun. You can just sit down, hit 18 holes and try to beat the par for a few minutes and quit, without feeling addicted and desperate to try again. But I wouldn't give this game enough credit if I would say it's just for the fun. There's no kind of real competition involved in this game, which doesn't mean it's not challenging enough. You can play with up to 8 players and if you like to edit characters or choose a lot of different kinds of ways to play, you're very well supplied in this game.

Like many other golf games, you have a swing meter, but this one has an extra addition to the gameplay. You will see a ball on your screen and a moving "dot" will appear on that ball. This will determine where you hit the ball and it can have a severe impact on the flight of your ball... Wind will also affect where the ball will hit the ground and a special windmeter at the top of your screen will show you the direction and the force of the wind at that very moment.

The graphics are really nice, which makes this game a pleasure to play. The game could do with a better variety and use of sounds, but there are ingame sounds, which also makes this a better experience. The only thing that I don't really like about this game is that there's only 1 course you can play on, which makes it boring after a while.

If you like to play some golf, just to play golf and not because you're really in for a challenge or some kind of competition, this one is highly recommended by me. I must say, it's not totally abandoned by competition, but other golf games are based on it and that's not what this game is about. 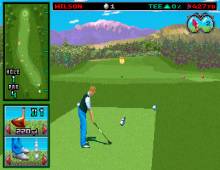