Tour 91 is a fun bicycle racing game from underrated Spanish developer Topo Soft. While it will never be considered the most realistic cycling game on the market-- or even the most fun-- it does offer a few hours of fun for the arcade-oriented fans of the sport.

There are only 4 play modes (i.e. tracks): against the clock, against opponents, racing up the mountain, and racing in the streets, and the whole "tour" is merely these four tracks strung together. The first 2 modes (against the clock and against opponents) are played from a 2D side-srolling view, while the last two are played from bird's eye view-- a nice change from other bike games. The differences between them aside from different graphics, however, are sadly minimal: racing up the mountain is, strangely enough, not much more difficult than racing in the streets. The tracks are just more sinewy and controls seem a bit sluggish. Worse, the key to winning seems to hinge only on how fast you can repeatedly hit "accelerate" key on the keyboard, making this a much shallower game than it could be. A decent game, but only with a limited appeal to joystick jocks who are either very dexterous, or are very patient. 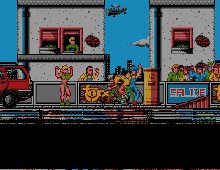