This is probably the worst sport game Tynesoft ever made. Given the company's excellent track record in sport games (e.g. Stunt Car Racer), this means Summer Olympiad isn't very bad-- it just doesn't live up to the standards created by Tynesoft's other sport titles. The graphics are up to the usual standards, but the gameplay and choice of events just don't mix well. Imagine Clay Pigeons Shooting, Fencing, Triple Jump and Diving all in one tournament game, with little relationship between them and a wide inconsistency of quality. Fencing, for instance, is much more enjoyable and controllable than Triple Jump. Not as bad as some sports games, but definitely not up there with the best. Tynesoft could have done much better. If you are wondering how good Tynesoft can be with tournament games, check out the far superior Winter Olympiad, also on this site. 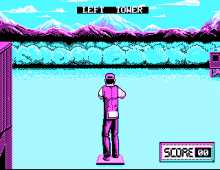