Scottish Open is a decent golf game from Core Design. The first entry in the short-lived "Core Sports" label, the game offers armchair golfers a chance to compete in one of the world's oldest tournaments, but one that has been neglected by most golf games: the Scottish Open. All four courses in the tournament are included, and you can practice, join the Scottish Open, or play the regular tournament.

In addition to regular tournament modes, Scottish Open offers three friendly competition modes that you won't find in many golf games: skins challenge, derby scramble, and shoot-out. The graphics are pleasant, although they don't approach the details of Jack Nicklaus series or Links. The designer's emphasis is clearly on accessibility and playability rather than realism, so you will find the interface very easy to learn (hit SPACEBAR at any time to bring up the help screen) but also that many realistic factors such as wind direction and speed don't seem to have a noticeable impact on the ball's path.

Overall, Scottish Open is a good choice for a beginning golfer, or anyone who is interested in this particular tournament. There is realy nothing here to set it apart from the top golf games, but the good variety of gameplay options and graphics should at least keep fans happy for a while. 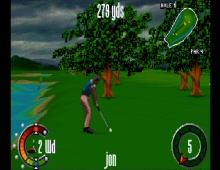