The very first statistical baseball simulation for PC, Pro Manager is a faithful adaptation of the Avalon Hill board game of the same name that enjoyed moderate success among tabletop baseball fans in early 1980s. As the first game of its kind for PC, the closest comparison to Pro Manager would be SSI's Computer Baseball, which was released for Apple II a few years earlier. Thanks to its board game roots, Pro Manager is a much better, and more realistic, rendition of the sport than SSI's classic. You can choose the number of visiting and home teams in the league, decide on the lineup, select the number of pitchers, and decide in-game tactics as a coach.

Pro Manager is an all-text game. The diamond is represented by ASCII characters, which is of course not very good at conveying the action, but more than adequate for statistics fans to see what is going on. In addition to a good range of coaching options, the game offers sound/music capabilities, as well as the option to print the results to the printer.

Overall, Pro Manager may suffer from its archaic engine and lack of graphics, but it represents the first commendable effort in portraying statistical baseball on the PC. Armchair coaches may be surprised at how versatile this granddaddy of baseball sims is-the next revolution in the genre didn't come along until Pete Rose Pennant Fever and the next giant leap, EA's Earl Weaver Baseball. Recommended! 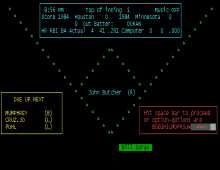