Football games that convey the action on the gridiron with digitized footage from real matches typically fall short off the mark, and Konami's NFL Video Pro Football (VPF) is no exception. Although a sequel of sort to 1992's NFL Football, VPF is actually a much inferior game. Konami wrongly decided to throw away the smoothly animation action of NFL Football in favor of digitized footage, and the result is a very lackluster game.

The game might have been a success had there been a challenging, realistic AI behind it, such as the one in XOR's much-lamented NFL Challenge. Unfortunately, Konami was never known for coding intelligent AI, and it shows. Although the game boasts a decent-sized playbook, both for offense and defense, your choices don't really matter since the computer player hardly puts up a good fight.

In short, VPF is a case of form over substance. A good example of a good-looking game that is lacking in gameplay department-- and a curious remnant from the gaming industry's craze over digitized photos/videos in early 1990s. 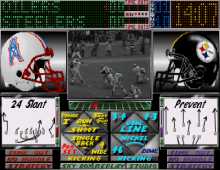