Minigolf 1 Shot is a great entry in Retro Remakes' One Switch Competition. It finished a respectable third from over 40 entries in the competition, and deservedly so. Like all other entries, the game can be played from the start to finish with only one keyboard button. The interface cannot be more intuitive than this, but the designer manages to design 18 holes of increasing difficulty in addition to a very smooth gameplay, crisp cartoony graphics, and a lot of features. Once you beat a hole, you 'unlock' it for future play in Practice Mode. You can also compete in tournament play against 19 other computer players, choose from 3 Characters (different difficulty levels), and win trophies for each hole if you do well enough. Overall, this is a very well-designed freeware game that is a great example of how good games can be designed around the one-button concept. Highly recommended. 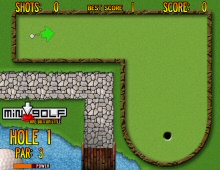