a nifty little title that challenged racers to a variety of series and then allowed them to spend the resulting prize money as they rose through the ranks to "Championship Cars." The drive was only fair, even for the time, but six different car types. The game's best feature is undoubtedly the innovative "career path" option that tracks your progress from rookie to circuit champion-- a really cool feature for its time that was sadly not followed up on by later games. Overall, a solid racer that offers a few new ideas and decent realism, if not earth-shattering. Anyone who enjoys the game should check out Andretti Racing, a sequel released in 1997. 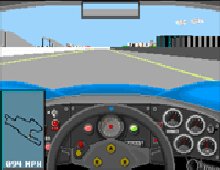