Leeds United is an appallingly bad football management game from German developer CDS. Like numerous games of this ilk, the game depicts the rise (and fall?) of an English team in their struggle up the highly competitive ladder. Unlike most other games, you are stuck with Leeds United in this one - although you can attempt to buy players from other clubs if you don't like your lot. With primitive graphics, illogical match results, and very simplistic gameplay, it is no wonder that the game sold so poorly it remains very obscure to this day. If you are a die-hard fan of Leeds who must own everything with their name on it, then perhaps you might want this Real Dog. Otherwise, stick to cream of the crop like Championship Manager instead. 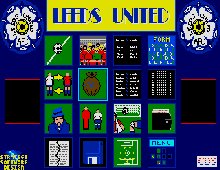