Dethkarz is an excellent futuristic racing game that rivals, if not exceeds, UBI Soft's better-known POD in the fun department. The game's name purposefully sounds like "Death Cars" to signal its style as a "combat racing" game: futuristic cars equipped with weapons to fire opponents off the track. The usual cross-the-finish-line-first objective is augmented with having to pick up power-ups and upgrade your car with better weapons.

Anyone who has played Interplay's outstanding Wipeout XL will be familiar with Dethkarz's excellent 3D graphics, branching tracks, and cool-looking cars. There are twelve different tracks you can compete in, each created with a lot of background detail and great flurry of psychadelic colors. If you have a 3D card (3Dfx or Direct 3D compatible), you will be treated to outstanding visuals that look as good today as they did in 1998.

As good as the game looks, the gameplay it not flawless. For one thing, it is extremely difficult, at least to novice racers. The cars tend to slide across the road very easily, which makes cornering next to impossible without slamming on the brakes. Since none of the tracks are guarded by rails, this means you will often see your car slip right off the edge of the tracks at sharp corners, losing you valuable time, until you either master the controls or give up playing entirely. Another shortcoming is the limited selection of power-ups: you will find plasma balls, but little else besides these uncreative weapons. The last major downside in my opinion is that you can play only four tracks at a time, gaining access to the next group only when you finish in the top three for each race of the first four tracks.

As with most racing games, though, Dethkarz becomes much more fun once you master the controls and once braking hard at corners becomes second nature. While it is definitely not the best futuristic racing game you will ever play, the slick graphics, semi-realistic and furious action, and a good track selection make for a game that deserves much more credit - at least as much as POD if not more. Highly recommended, but with some caveats. 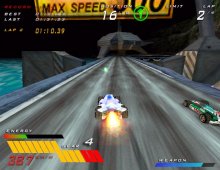