A fun action racing game with excellent digitized graphics of cars and scenery, Deadly Racer makes up for what it lacks in realism and long-term play value with outstanding graphics and sound effects.

There are over 10 cars to choose from, each with its own characteristics. As far as I can tell, the cars are modeled after real-life counterparts, although the names have been slightly altered (Porsche to "Corsche," for example) to evidently avoid potential lawsuits. There are three gameplay modes: practice, single rally, and world tournament rally-- although the only difference between them is whether or not your time is recorded, and how many tracks you compete in. You can choose between automatic gear or manual for additional challenge, although due to the game's strong arcade focus, they are not very different from each other.

Where Deadly Racer truly shines is in the graphics department. The cars are very well digitized, their movements are fluid, engine sounds are authentic, and details such as skid marks, track scenery, and weather effects (e.g. rain) are all top-notch. There are two factors you must contend with on the tracks: damage and fuel levels, both of which are presented clearly on the screen. Hit the curb one too many times or accelerate too often, and the race is over.

Overall, Deadly Racer may not have big-name label behind it (in fact, I'm not even sure who wrote the game), but it's definitely worth a look for all racing fans, especially fans of action-style racers such as Destruction Derby Be warned, though: the cars are not easily controlled, and the lack of on-screen map of the track can be disorienting for a while. Watch the yellow arrow to see where you're going! 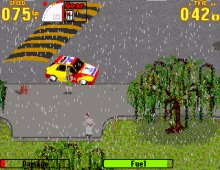