No doubt one of the most obscure Macintosh games ever made, Virgin Mastertronic's Club Racquetball is a solid computer version of one of the world's "niche" sports -- racquetball, a distant cousin to squash. For anyone who is not familiar with the sport, racquetball and squash are almost identical games, with some minor differences. The major difference is that the squash racket is longer than racquetball racket, and different ball and court sizes. In squash, the rallies are much longer as the front wall has a 19" tin which the ball must be hit above. This creates a much longer rally and arguably more challenging game. The other major difference between the two sports is that in squash, the ball must not hit the ceiling or it is out of the court, while ceiling shots are allowed in racquetball.

Club Racquetball is a decent depiction of the sport, with multiple players of both sexes you can choose from, and a variety of single matches and tournaments. Multiplayer options are also available, although only as hot-seat play, so jostling your friend on the same keyboard makes the game more cumbersome than fun. The computer AI is quite good, and movement of the ball is generally realistic, although the absence of realistic ball shadows make judging the distance quite difficult.

With good sound effects, crisp graphics, and a variety of tournament options, Club Racquetball plays a good game of this little-known sport. Too bad it was never made for PC, but then again that is not so surprising given the sport's limited popularity compared to squash. Gameplay-wise, Krisalis' Jahangir Khan's World Championship Squash is a much stronger game, but racquetball fans will have little to complain with this old game. Not exceptional, but not a bad game either. 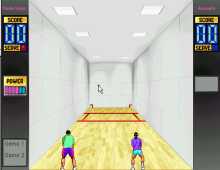