Carl Lewis Challenge, The has a lot of things going for it. One of the few sports games that I have seen from Psygnosis and as usual with their games the graphics stand out as sort of brilliant. The game itself is a lot deeper than the title would suggest in that it is about more than just Carl Lewis. You can select from a variety of countries to enter your athletes from, and then train them to hone their abilities before the real competition begins. The events are varied and range from running the 100 meter dash to the javelin throw. And the selection of athletes is generous with a good selection of both male and female stars. I rate it a 3 out of 5. 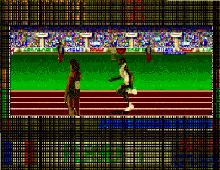