Archer Maclean?s Pool is an excellent follow-up to Jimmy White?s Whirlwind Snooker, which he also designed. The review at Amiga Games Database says it all about this rare old game:

"Archer Maclean had a success in 1991 with Jimmy White's Whirlwind Snooker, so to widen his audience he put together a pool game using the same 3D-engine he devised for Snooker. As well as adapting his engine to the rules of 3 pool variants (UK 8-ball, US 8-ball and US 9-ball) and altering the dimensions of balls and table, he also included many new computer opponents (16 more than Snooker's 4) and added the option to play matches or a tournament as well as single frames. The game is just as good as Snooker was in terms of realism, with the exception that in the US pool-variants, in which the balls are numbered, the numbers stay fixed in the centres of the balls, giving them the impression of sliding across the table instead of rolling."

The sequel of sorts to the higly popular Jimmy White's Whirlwind Snooker, Archer Macleans Pool uses the exact same engine as the first game, the only obvious difference being the switch from snooker to pool. You are given a choice of either UK 8-ball, US 8-ball or US 9-ball and the option to play either matches or tournaments against friends or AI players (of which there are over 20).

The graphics are nice and clear, the interface is simple and well thought out and the physics model is spot on. It's hard to criticise AMP because it is a damn good simulation of the real thing. Oh, and for a little surprise leave the mouse pointer static for a few moments and keep your eye on the balls - it always cracks me up.

This is another Pool game from the beginning of the 90s. Several of this game typer were made, in which you can use our mouse to aim and rotate around the table and stuff. In this version you can play almosy every pool game and even do some trickshots. 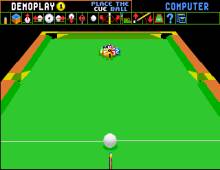 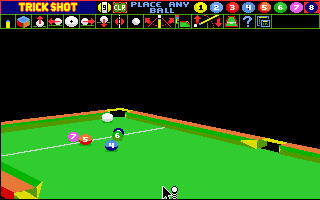