Trust and Betrayal: The Legacy of Siboot

Trust and Betrayal: The Legacy of Siboot is an obscure gem by Chris Crawford, creator of the acclaimed political simulation Balance of Power. Billed as "the world's first narrative game," Siboot does fulfill this cryptic promise: it is a very unique strategy game that emphasizes character interaction and personal-level diplomacy. The game is set in a fictitious gameworld that comprises several planets, each populated by a distinct alien race.

Being a very unique game, it is quite difficult to explain exactly what Siboot is all about. The game basically involves exchanging information with other characters in order to work out your strategy for a nightly round of "mental combat" that boils down to repeated rounds of rock/paper/scissors. To win, you have to trade information with the non-player characters, using an iconic language in which you can not only offer trades but also make promises, express emotions, or just exchange small talk. The challenge comes from the fact that everything you do affects the NPCs' opinions of you. You usually can't win without giving information about your friends now and then, but if you do it too often or fail to apologize when they find out, you won't have friends for long (and no one will give you any more information and you'll lose). This emphasis on careful dealing with other characters and keeping track of their assessment of you (and vice versa) explains the game's name, as choosing who to trust and who to betray is key to success in the game.

Overall, Siboot is a masterpiece that is best experienced than described. It is a perfect game for an adventurous strategy gamer who is attracted to unique titles and has enough patience/perseverance to climb the steep learning curve. As with Crawford's other titles, Siboot is quite difficult to learn, and unfortunately no manual is available from Crawford's website where he decided to make the Macintosh version of game downloadable as freeware. But luckily for you folks, the PDF manual (after a few hours of laborious scanning by yours truly ;)) is available for download here. Siboot will probably seem too dry for most gamers who are accustomed to user-friendly, accessible strategy games. But anyone who takes the time to learn the ropes will definitely find Siboot a unique, intriguing, and rewarding game. As games go, it doesn't get more unique or esoteric than this. Highly recommended!

Note: The Macintosh version available from Crawford's website is version 2 of the game, which was released shortly after the first version for which I scanned the manual. The PC version for download on this site is version 1. Interestingly, I have received the PC version to distribute from Chris Crawford himself -- I had thought all along that only the Macintosh version exists! I hope more designers who own copyrights of their games follow in his laudable efforts to release out-of-print classics as freeware :)

It is also worth noting that Siboot represents Crawford's first attempt to depict human interaction in a realistic way in computer games—a worthy effort that would morphed into a lifelong passion with his ongoing Erassmatazz project. 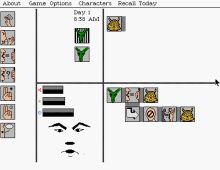 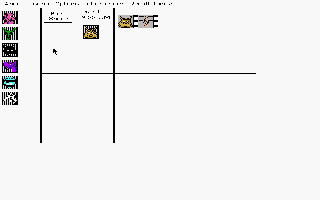 Trust and Betrayal: The Legacy of Siboot screenshots