Gene Pool is a very cool artificial life simulation from Jeffrey Ventrella, designer of Darwin Pond which was reviewed earlier on this site. The blurb on the designer's official game page says it all:

"Gene Pool is an artificial life simulation in which populations of physics-based organisms evolve swimming capabilities over time. These organisms are called "swimbots". You can set mate preference criteria and thus influence what the swimbots consider as attractive qualities in potential mates. The most attractive swimbots get chosen most often and so their genetic building blocks propogate to future generations. Eventually, swimbots get better at pursuing each other, competing for food, and becoming babes to other swimbots. Local gene pools emerge which compete for sex and food (for energy to have more sex). Eventually a dominant sub-population takes over. And sometimes, everyone just dies (but you can help keep them alive, by moving food bits and swimbots around, and constraining the migration of competing populations by using the "Great Wall")

Gene Pool is best appreciated as a virtual Darwinian aquarium in which you initiate a primordial soup, and then occasionally check up on what Virtual Mother Nature is up to - about every fifteen minutes (or every few days, if you are interested in long-term evolutionary experiments!) The strange and unexpected strategies for swimming (and being sexually attractive) that emerge can sometimes be amusing, and a bit reminiscent of that brand of creativity known as Darwinian Evolution."

The program offers dozens of options, attractive graphics, and is based on realistic enough science that geneticists can appreciate. Highly recommended for anyone with a slight interest in genetics. 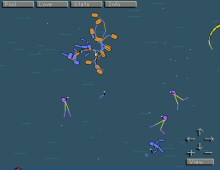