This is a flight simulation game with a good premise: You fly F-105's over Vietnam, mainly in "Wild Weasel" missions - i.e. air defense suppresion. Unfortunately the game doesn't manage to rise even to average level.

I distinctly recall that the game took a very, very long time to load, something quite unusual in those days. After staring at the title screen for minutes, you get treated to the intro sequence. An intro sequence consisting of average-quality (or maybe below-average) images and some PC speaker sound.

Finally, you get to the main selection screen. You can select your rank, which determines what missions you fly. The easier missions correspond to the lower ranks, or that is the idea - some Lieutenant missions were (to me) much harder than other, higher-ranked ones. Choosing your mission, after another long loading sequence, you get to the weapons loadout screen.

After loading up with appropriate weaponry for the mission at hand, you need to takeoff your plane. Hmmm. If this is a sim, how come you have a third-person view? Not a game for the sim enthusiast, this one - the third-person view is the only view available. Ouch. Taking off is also very, very difficult, and you'll all too often find yourself back at the main selection screen, after yet another failed takeoff.

Assuming you make it out of the ridge, you finally get to the main mission area. There you can actually drop bombs and fire Sidewinders at MiG's, and watch the not-so-pretty explosions. Bombing is pretty difficult, as the visual cues are less than excellent, still with practice you can hit your target. Often you'll find yourself low on fuel, and mid-air refueling is an option, but hard to accomplish with a couple of MiG's on your tail.

When at last you finish (or not) your objectives, you need to get back home. Your egress route will usually be down a river where, for a change, a bunch of AAA boats will be shooting at you. This time you _can_ shoot back, though you will probably have little ammo to throw at them. The flight home isn't hard but is pretty long, and you usually end up with very low fuel but the time you arrive back at base. Landing the plane is way too difficult - you'll often crash and burn after a completed mission.

All in all, this game is of moderate quality in my book. Even though F-105's and their role in the Vietnam war haven't been simulated elsewhere as far as I know, the game's low realism, poor implementation and high difficulty spoils the fun. 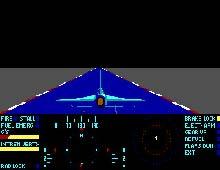 People who downloaded this game have also downloaded:
Hunt for The Red October, Red Storm Rising, Flight of The Intruder, Great Naval Battles 5