Not MicroProse's finest hour, but a great game nonetheless. This game is definitely neither a "realistic" nor "deep" sub sim (compared with, say, 688 Attack Sub), but that's not what it is meant to be: this is a fun strategy game with lots of political intrigue, great atmosphere, and some adventure elements thrown in.

There were a vast number of campaign missions and, if repeated, they were always random in location as well as types of ships involved, a truly dynamic campaign. Subsim skippers are never satisfied with "canned" missions and this contributed to the success RSR enjoyed. Some missions include only submarines, others include only a surface convoy, others include a surface task force (with carriers), and others with both ships and subs. Helicopters with sonar dipping equipment and sonar buoys add much to the turmoil. With the most challenging settings, events get so complex, and events occur so quickly, that having two people at the keyboard is a great help, and for beginners, almost a necessity (plus it is more fun). Trying to identify ships with signature analysis, running from incoming torpedoes, launching noise makers and decoys, dealing with several of your own wire-guided fish, and launching Harpoon and Tomahawk missiles makes for a very busy captain. Overall, a great submarine simulator that's still being played today. Highly recommended!

Red Storm Rising contains a lot of stuff for a submarine simulation game. The game is set underwater as you may noticed. At hte beginning of the game you have a lot of options to play. There are different time settings between 1984 and 1996. You can choose over 10 submarines and combats.

While playing the game a bit, I noticed that almost every key has a function. So be prepared. Nice thing of this game is that there is a save option.

Author Tom Clancy has become world renowned for his political dramas, military tales, and high tension, bureaucratic action. Many of his novels have been transformed into successful Hollywood movies and screen plays. Red Storm Rising is a Tom Clancy work that was turned into a successful video game and it revolves around a submarine that is being simulated in combat situations. The game is not one hundred percent battle specific, but it does have a good historical feel to it. Sid Meiers can claim development fame for this game, and given his excellent strategy and simulation track record, it almost guarantees that this is going to be a good one.

The game has a sound story to add to its feel. The Soviet Union has lost one of its largest oil refineries, and must make up for the loss by securing a new source. All possibilities in the homeland have been exhausted, and the Soviets are forced to press west into Europe in search of this precious commodity. NATO does not approve of this invasion, and the NATO allies come together to defend Europe from the Soviets. Their biggest concern is controlling the sea to make certain that the land battles can stay supplied and will be successful. The Soviet Red Banner Northern Fleet hopes to cut off the supply lines and destroy any chances of success in the land battles.

The game can be played anywhere from 1984 to 1996. There are ten different submarines that the user will have the opportunity to control, some available only in later combats. The user will be an American SSN submarine pilot. His method of operation will be that of a hunter killer and he will lurk in the waters of the Norwegian Sea, taking out a plethora of targets that appear threatening to the impending land war. All of the navigational controls are the responsibility of the user. He directs the submarine's heading, depth, speed and so forth. The keyboard will be used for the one button commands the user will need to activate the myriad weapons on the submarine. He has many available, and the sub is basically a stealth, underwater killing machine. The user can send missiles and torpedoes after anything that Russia controls. Game play is easiest on the surface because there is less for the user to manage. Underwater combat sequences are a little trickier, with the user not only having to fire, but also to control his own depth and use gauges and instruments to view the enemy. Still, the game has a nice balance and is good overall. 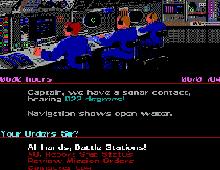 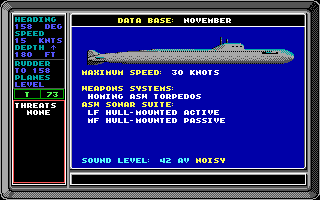