Tank is a modern tank simulation that showcases Spectrum Holobyte's strength in ultra-realistic simulation, although it never achieve the level of acclaim that Falcon 3.0 garnered.

Tank is similar to Microprose's best-selling M-1 Tank Platoon in its realistic modeling of modern tanks, intuitive interface, and integration of strategic elements with first-person action. Although it is a simulation of the M1A1 Abrams like Damon Slye's excellent Abrams Battle Tank, it places much more emphasis on strategy and larger unit operations than on graphical realism. Despite the fact that there are only 5 missions, each one is replete with vast terrain, many enemy tanks to destroy, and wargames-like options such as recon and air support. Training mission eases player into the game's interface, and strategic options add a fun dimension to what could have been an average 3D tank simulation. The graphics is good, and the ability to zoom all the way in (to 3D interface) and out (to strategic map) is innovative and well executed. Terrain slopes, however, still present logistical problems as with many tank sims of that time, but Tank has enough to satisfy both the hardcore sim fan and wargamer interested in hands-on experience inside a tank. Thumbs up! 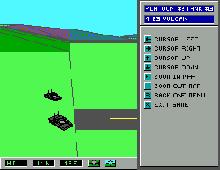