Oldie shoot em-up by Cascade Games, in which you're up to the task to save mankind from a narcotic drug called "Sky". Simple arcade fun-- very similar to Titus' Offshore Warrior, but with smoother graphics and gameplay. Lack of variety, both in terms of terrain and enemy ships, makes the game quite repetitive. Good fun only for a few minutes if you want to reminisce about the good ol' arcade days :) 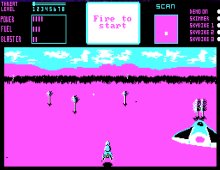