PSim (short from Particle Simulator) is a primitive artificial life simulation that nonetheless is both interesting and fun. It is based on objects, called particles, which interact with each other in a 2D world. The description from the manual explains the concept very well, so I'll just quote it here:

"The particles operate using very basic procedures. Their main goal is to stay alive by returning to a food source when they need energy, and to procreate when a partner is found. Those yellow (or other color, depending on which settings you use) circles with one eye are particles. Green or red (or other colors), nonmoving objects are food sources (red food sources have an unlimited capacity). Particles all operate following the same pattern. They move around in the world, bouncing of edges and drifting, and they return to the closest food source when they are in need for food. If they cannot reach a food source before their energy is used up, they die. Sometimes particles engage in combat, sometimes they procreate, sometimes they repulse each other. Speed of the particles varies between a minimum and a maximum speed.

When their energy is almost used up, particles will try to find a food source to get more energy. Particles have a distance over which they can see (inheritable property). If they have a food source in their sights and they're hungry, they will go there and transfer energy from it. If they don't see a food source, they go back to the location where they last saw one. If they're still unable to locate a food source, they will continue moving around until they enter their'desperate' state (all defined in their inheritable properties). In their desperate state, particles shift color and they pick up speed, trying to find a last food source. However, in this state, particles will also attack other particles (a process during which they can die themselves) in order to gain the energy of their victim.

When particles find a suitable partner they will procreate if certain parameters allow them to (these are defined in their inheritable properties). When they procreate, particles will produce a child (exactly in the middle of them), which inherits the properties of both parents (properties are averaged, with a possibility of mutation). Both parents transfer half of their energy to their child, andthey're back on their way.

Particles reach a predetermined age. This age is determined when the particle is created, and it is based on a 'minimal life span' and an additional'extended life span'. When a particle dies, its remaining energy is converted into a food source."

In addition to an interesting gameplay, PSim has a very user-friendly interface. All functions in the game can be accessed through the toolbar and through a right-click interface. The toolbar buttons show hints, so their function can be determined quickly. If you right-click within the world, you also get a popup menu with additional functions. Additional functions of the program include the batch mode, the data logger and the library manager (which can be also be used to change the default particle property set). If you are a fan of J.H.Conway's famous game of Life, PSim is well worth your time. It may seem too dry for some, though, so be warned. It's also definitely more like a "software toy" rather than a "game" with predetermined goals, so be warned of that as well. 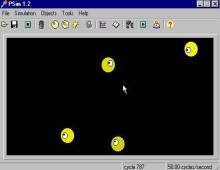