Heh, something different in the arcade driving genre. This time You'll drive...toys! Boats, 4x4, sport cars...all kinds of toys. The tracks are also very interesting - kitchen table, desktop, bathtub... And it has a good old multiplayer option. Great to play with friends.

This game is volume 1 in one of the greatest racing series ever made to the PC. You are not only racing in cars, but also boats and other weird vehicles. And the tracks are also very different from other games, as you drive on a kitchen floor, on a pool table and race in water.

This game is a very original game. The ability to control a lot of vehicles including small cars, motorboats, tanks etc. makes Micro Machines a very good arcade game.

Micro Machine games are departures from normal racing games: instead of powerful F-1, you'll race toy cars around homemade courses such as Dad's desktop or Mom's kitchen, each with its own obstacles. Not only do you have cars that require different handling techniques for each course, but in Micro Machines 2 you even get to steer a hovercraft or an helicopter. There are also different playing modes which include innovative "head-to-head", in which you get points when you're so fast you drive out of the screen while your opponent is still in the back part of the screen. Both are great fun, and very addictive :)

This game is great. The first level you are in a little jetboat, and you are racing in the bathtub or sink, amongst the bubbles. Then you progress to racecars amongst the waffles, milk spillage and spoons of the breakfast table. You also get to race little trucks and other types of cars, all in funny settings around the house :)

When you pick who you want to play, there are many characters to chose from. You also pick which race you would like to race in, or cycle through the tracks. There is a scale up the side (see screenshot) which starts of with 5 dots for you, and 5 dots for your opponent. To win a race you have to get to the other side of the screen from the opponent 5 times, every time you do that, then one of their dots becomes one of yours. Of course if they have 9 and you have one, you have to win 9 times to win the race overall. It's a lot of fun, and can make races last a long time if you have met your match.

This game looks excellent. The graphics are very good. I played as a girl with pigtails and when I won she would fling her head around like a little kid and stuff - great animations. The racing and stuff also looks great, the scenes etc. I didn't play with sounds though, so I can't comment there.

Definitely worth a try, play vs. the computer or against someone else multiplayer. 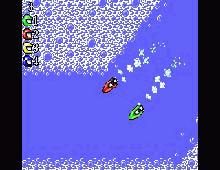 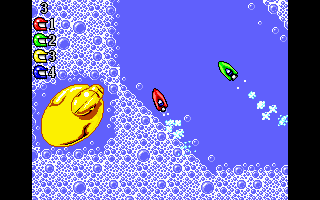