A very early (1987!) Age of Sail simulation, High Seas emphasizes joystick maneuverability at the expense of realism and playability. Although the game deserves notice for being one of the first to offer attractive top-down isometric view for naval warfare, there is simply not enough gameplay to keep anyone interested for long. The game's scope is extremely narrow: just create a ship, choose your opponent, and off you go in a one-on-one battle to the death. As veteran wargamer M. Evan Brooks remarked in his brief synopsis of the game, "the graphics are somewhat convoluted, as was overall gameplay. Fleet engagements often resembled a New York City traffic jam (although casualties were probably lower in the simulation)." Very disappointing, to say the least, and its age really isn't a good excuse for the poor quality at all, in light of early classics e.g. Ancient Art of War at Sea which were made even earlier than this old game. 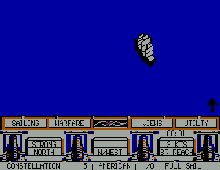