"A tactical simulation of the Bomber Offensive against Germany during World War II, it was relatively detailed. However, gameplay became somewhat tedious." This would be the last flight sim in the series designed by John Gray that began with Fifty Mission Crush and B-24 Combat Simulator. 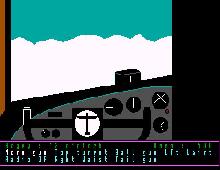