Eye of The Storm

Eye of The Storm is a solid space simulation that offers fast action and several HUD innovations. Similar to countless games of this ilk, Eye of The Storm casts you as captain of a spaceship, where you must fulfill various missions. It's all been said and done many times before, but what makes Eye of The Storm much better than average is the very smooth, fast polygonal 3D graphics that is much more advanced than most space opera games of the time. Ship handling is excellent, and in contrast to pure space action games such as Wing Commander series, you'll really feel that you are fighting in space. Stars recede from you at appropriate speed, and objects have appropriate sizes and behavior. There is a lot of enemy ships to fight against, although unfortunately their design is somewhat lackluster. Similar to Elite games, you can upgrade your ship, buy equipment, and buy or sell cargo. Most ship enhancements come in the form of "pods," e.g. salvage pods, fuel pods, that you can attach to your ship. The action is typically very fast and furious, as you'll be swamped with dozens of enemy ships to contend with in almost every mission. One of the game's highlights is the excellent HUD, which not only shows the targeting cursor, but also the position of your ship relative to the target, as well as the excellent radar screen.

My only major complaint with the game is that the background is way too red-- sometimes it's difficult to make out other ships, especially blips on the radar that are similar to red. While Eye of The Storm won't take the crown away from Elite or Wing Commander, it's a fun space simulation that deserve a closer look, especially since it's one of the first games produced by Jason Kingsley, who would later go on to greater fame with another space simulation: I War (Independence War in the US). 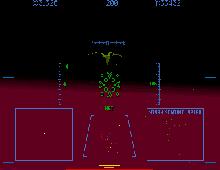 Eye of The Storm screenshot

People who downloaded this game have also downloaded:
Airline Simulator 97, Birds of Prey, Back to Baghdad