Computer Underground is a fun freeware game about -- you guessed it -- a hacker's life. Similar to games such as Neuromancer or more recently Uplink, your goal in CU is to become the greatest hacker in the world. Along the way, you will download and use dangerous computer virii, upgrade your hardward and software, attempt to battle other hackers, break into corporate systems, and hack into the bank's computer for some cash. Naturally, the kind of computer you have determines what level of software you can run. For example, if you have a level 5 computer (Kwik 20), you cannot run any software level higher than 6. Despite how Microsoft behaves in the real world, the game lets you run any software whose level is lower than than the level of your computer.

For a freeware game, CU contains a surprising amount of variety and options that will keep you entertained for a while. Unfortunately, a lot of the programs in the game (especially stuff you can buy) are not described, so there is no way to find out what they do until you buy them. This means save & restore seems to be the best way to play this game; a more user-friendly interface would have made this "cheating" unnecessary. If you enjoy games like Uplink, CU is worth a look. It's not as good as those commercial titles, but it's good enough for a few minutes of fun. Interesting, at least :) 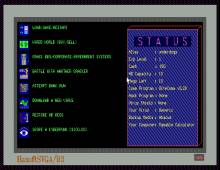