Bridge Crew is an excellent spacecraft management similar to Super Star Trek and subsequent games, i.e. as spaceship commander, you will explore galaxies and engage in combat with other ships. The catch is that it is designed as a "computer assisted multiplayer RPG," which means you need a few people to play the game, with one person acting as GM (gamemaster) who constructs scenarios for the players and award appropriate scores. Once you have a GM and willing vict... err, players, the game's excellent mechanics and a wide range of options will get you hooked.

The best thing about Bridge Crew is that it is not only a good game in its own right, but can also be used as a supplement to existing pen & paper sci-fi RPG systems such as GURPS Space, Traveller, or others. The GM designs a scenario for the players, and may get actively involved during the playing of the scenario. The players roll up characters just as they would in a normal RPG, each playing a bridge officer in the universe created by the GM. Available player types include Captain, Beam Weapons officer, Helm Officer, Missile Weapons officer, Communications officer, Security officer, Damage control officer, and others. Each player can issue commands that are appropriate to his/her role. For example, Helm Officer can set course and speed of the ship. The GM could allow players to have more than one function during the game to allow greater range of options.

The gameplay is similar to other starship simulations: you issue orders from the tactical display, which shows your ship and the immediate vicinity from the 2D overhead view. While GM can design non-combat scenarios, Bridge Crew is best played with starship combat elements to take full advantage of the game's combat-driven options.

With a very comprehensive array of starship commands, excellent GM options, and great multiplayer support including null cable modem and TCP/IP, Bridge Crew is well worth a look to anyone with an interest in sci-fi starship combat. The registered version allows you to save the game, among other features not present in shareware version. If you run GURPS Space or Traveller campaign on a regular basis, Bridge Crew is highly recommended as an adjunct that will really spice up your space-faring campaigns. 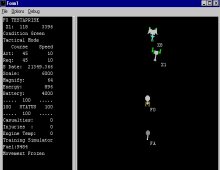