Black Monday is a simple stock market simulation that manages to capture some aspects of the real market despite its primitive engine. The goal of the game is simple: amass the most amount of money (and thereby score) at the end of 10 turns.

There are many unrealistic factors in the game, all of which seem to be a result of technical limitations rather than design choice. The most aggravating of these omissions is the fact that stock price behavior seems to be random-- there is no news report of any kind that will give you a clue as to which way stock prices will go on the next turn. Even believers in random walk hypothesis of stock market (myself included) will likely frown on this implication that stock prices are not affected by anything at all in the real world. Also, stock price will be only be divided by two no matter how much it splits by (even for 3-for-1 and 4-for-1 splits), and every company's stock automatically splits at $140 or higher. Market practices that are now the norm, such as short-selling and limit orders, are also missing from the game. There are, however, some concessions to reality, e.g. you could influence the market price by selling large blocks of shares (250,000 shares or more-- laughable by today's standards when stocks are trading in the stratosphere, but relatively significant back then). You can also take out loans that will be periodically rewritten to the current interest rate, and be paid dividends by larger companies.

Overall, Black Monday is a far too simple simulation for anyone who's interested in how stock market actually behaves (for that, try Wall $treet Raider instead). Comprehensive in-game instructions and simple mechanics will provide some fun for beginners looking to practice basic stock market transactions. Up to 6 players can also compete, making it a decent party game for those nights when noone could find the Monopoly board.

The game was given a significant facelift and re-release as Stock Market in 1990. Try that version instead for a much better, more realistic stock market simulation and leave Black Monday as a curious piece of nostalgia only :)

Like the stock market your computer has just crashed! Now you can feel the full effects of losing it all!!! In this stockmarket strategy game you can compete against eachother (up to 5 players). The object of the game is to buy and sell large amounts of shares and make more money than your opponent(s). 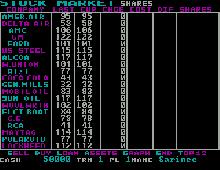 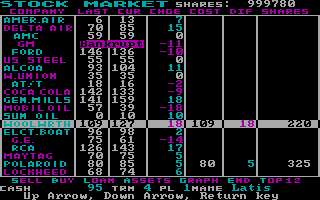