Worlds of Legend (a.k.a. Sons of Empire)

Sequel to underrated Legend (a.k.a. Empire), Worlds of Legend continues the predecessor's storyline and great gameplay, with several enhancements. The real-time play (where you see other parties marching on the map and the passage of night and day) and good adventure-style puzzles are augmented by better writing, more plot development, more potential party members you can recruit, more monsters and magical artifacts, and even a larger map. It's essentially the same game as Legend, but with a different plot and more of everything. In short, if you like the first game, you'll definitely like this one. 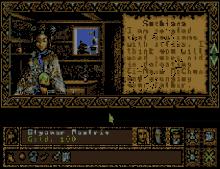 Worlds of Legend (a.k.a. Sons of Empire) screenshot