Space Wrecked, as the name suggests, is a sci-fi RPG in which you must investigate an abandoned spaceship and escape unscathed. It has an interesting plot that builds through the various books and monitors scattered in the game, and sports a strong adventure elements (find the keycards, etc.) The cumbersome interface (which forces you to access a separate "objects" screen to pick up anything) and average graphics are the game's weak points. 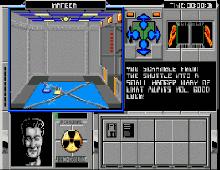