Undoubtedly the closest a console game ever gets to capturing the feel of traditional PC RPGs, Shadowrun for the SEGA Genesis is an excellent and faithful adaptation of FASA's famous Shadowrun cyberpunk P&P RPG system. Unlike its Super Nintendo counterpart (also reviewed on this site) that is basically a fun action game with some RPG elements sprinkled in, this Genesis version of the game is a true RPG that will please anyone who likes Shadowrun or PC-style RPGs in general.

The premise in this cyberpunk epic: you arrive in Seattle in the year 2050 to find out who killed your brother, and why. The story takes a backseat to the heavily stat-driven gameplay, most of which requires you to collect (a lot of) money and develop your character with cool implants, spells, weapons, and assorted computer software. There are optional quests, sub-plots, and enough plot twists and alternate options to keep you glued to the screen and replay the game (although there is only one "successful" ending).

As can be expected from a good cyberpunk game, Shadowrun lets you hack in cyberspace to get various passwords, money and information in addition to the basic RPG elements of talking to NPCs, fighting the undesirables, and improving your stats. True to the original P&P RPG, you can choose to be one of 3 available character types from the beginning, and develop different skills as you play. You can also hire NPCs to work for you. It's a lot more fun to hire different archetypes to fully experience the game. If no one in your party has a data jack, for example, the game will be much harder, and you miss out on a very neat cyberspace combat system. The game has a lot of depth: you can spend dozens of hours - if not hundreds - if you want to collect every spell, update your cyberdeck to the most powerful, find the best programs, etc.

Because it follows the original Shadowrun RPG rules very closely, you might find combat in the game tedious if you prefer the simpler system that characterize a typical anime-style console RPG. But on the flipside, fans of Shadowrun or "systematic" RPGs in general will have a great time in Seattle. The game does have some minor omissions of the P&P RPG rules, but they are not major. Whether or not you are a fan of old-skool RPGs or cyberpunk computer games, you will love Shadowrun. If you think console RPGs are all simple or easy, Shadowrun will be a pleasant surprise. 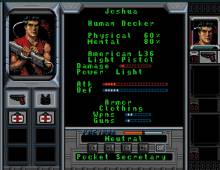