Revolt of Don's Knights is an awful first-person RPG that lacks the depth and charm of more well-known RPGs (Eye of the Beholder 1 and 2 come to mind). The plot is not earth-shattering, but at least it's not the typical "kill the foozle" cliche found in 99% of all RPGs. The evil Baron Raymond has attacked the castle of your king's nephew and got away with secret 2 documents that describe all secret passages to the kings castle. The king asks you to regain the stolen documents, identify the 5 allies of Baron Raymond, and stop the rebels from taking over the kingdom in the next 12 days. Your reward? Why, fame and glory of course!

The game is played from a first-person perspective. For some reason, you can only move by clicking on movement arrows on screen - the game doesn't use keyboard arrow keys or any keyboard keys at all for that matter. This makes the game a long series of rapid clicking, and it's quite exasperating. Worse, it takes at least 4 clicks to put something you pick up into your inventory. First you must click on the object to pick it up, then on the button on your character's portrait to bring up his paper doll posture and possessions. Then you must click on the bag next to his feet to open it up, and *then* once again click on the slot you want to put the object in. Very cumbersome, and very annoying when you are attacked from behind and killed while you are trying to equip that blasted sword.

This awkward interface would be forgivable had other elements compensate for it. Unfortunately, there is nothing to save the game from the Real Dog status. The graphics, in VGA, are passable, but the dungeon is far too drab, too empty, and too boring to sustain your interest for long. All in all, a thoroughly below-average game anyone can afford to miss. 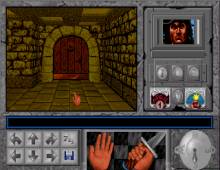