Price of Destruction a decent roleplay games written for Windows (not that many of those around). You start the game with an almost premade character but with a little customization you can add your part to the game. By using the multiplayer option you can play additional players at a time (a max of 4 characters is possible within the same party). Things like toughness, health etc. are included in the game but is not as detailed as many other roleplay games.

Let me first state that the game is quite difficult in the start and you will most likely die a lot in the start since you simply have to learn how the combat system works. The reason it's difficult is mainly because of the top overview in the game mixed with the real time combat. Because of this you have to react fast when you are attacked since the game screens are quite small as well. You can search the bodies you come across (as well as the people you kill) by walking on top of them. You can find many different things doing this that will help you further in the game.

What I really like in the game is the arcade like combat used in Prince of Destruction combines with the small but well done graphics and not many games have been developed like this. Both the music and limited sounds are fine as well and together it makes Prince of Destruction a recommended game for any fan of the roleplay genre even with the limited skills, stats and game story. Kudos to the developers.

Prince of Destruction (PoD) is a Windows based, overhead role-playing game that takes place in the land of Nestaria. The character has been summoned by a great wizard to overthrow the evil ruler and free the kingdom from tyranny. OK, so the plot does not exactly ooze with originality. So how does PoD work? What are the pros and cons? And most importantly, is it fun to play?

The player selects from among 4 pre-made characters (warrior, archer, etc.), and can tweak the attributes, such as accuracy, strength, etc. as he sees fit. Character creation is very simplified, and will definitely disappoint hardcore roleplayers, but there is some customization. When the numbers have been tweaked to the players satisfaction, the game is begun. Character control is strictly keyboard, which may seem frustrating at first, but one quickly learns the necessary keys. Conversation with NPC's is similar to the Ultima's in that keywords are used to generate information. Typical questions for an NPC would be JOB, NAME, etc and the responses from NPC's will have words in red, which the player can get additional information on. There is a window the player can open to review NPC conversations in case a detail has been forgotten, which is very handy.

Fighting with monsters takes practice. The player can expect to die a lot in the beginning until figuring out what is going on. (Hint: Use your ranged weapon to start off with). Monster corpses can be searched by running over them, revealing gold, healing potions and other assorted goodies. A 'paper doll' character shows armor class (protection) which can be altered by finding or purchasing new/better items. Sometimes with the fast and furious battles (in real time) it is easy to pick up items and later forget to check the inventory to see if anything that was found can aid the character. Hit the 'I' key frequently to keep tabs on what you have on hand, because you may have something you can use and not even know it. Aside from talking to NPC's, you will find keys, tomes (with information and spells) and switches. Teleporters are common as well.

The graphics are nicely rendered, but small. My vision is quite good, and I found myself squinting at times to see some of the text. The music is simple, but nicely done. Sound effects are sparse, but adequate. There is a map so the player can tell where he is in the game world in relation to cities, dungeons, etc. Also, the game supports up to four players at the same time, however I did not have time to test this feature. The file includes the manual, so those interested in multiplayer gaming in the world of Nestaria should look there for information.

Overall, I found this game to be enjoyable, but it's not for everyone. The beginning can be frustrating, but after gaining a few levels, the player can explore and engage in battles without having to worry about instant death. The keyboard only controls and NPC conversation system may turn off some, so the game is not for everybody, but to my tastes, adventuring in Nestaria was a good way to pass some time. Recommended! 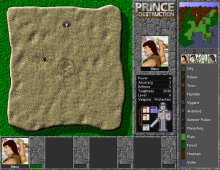 People who downloaded this game have also downloaded:
Lord of the Rings 1: Fellowship of the Ring, Tower of Darkness, Vengeance of The Excalibur, Lord of The Rings 2: Two Towers, Bahamut Lagoon