This game is best described as the "light" version of far better-known Magic Candle series. Mindcraft seems to be targeting the RPG newbies with simplified RPG engine and statistics-- instead of 4 characters, now you control only one. Combat and spellcasting are also not terribly exciting. Still, like Origin's Tangled Tales, it's a commendable (and underappreciated) effort to expand the RPG market. 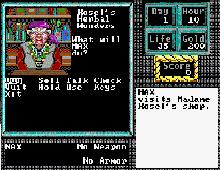 People who downloaded this game have also downloaded:
Hexx: Heresy of The Wizard, Halls of The Dead: Faery Tale Adventure II, Romancing Sa-Ga 3, Knights of Xentar, Magic Candle, The