Hired Guns is a neat futuristic RPG that allows you to control 4 characters simultaneously via 4 windows. The plot, which would send your band of galactic mercenaries on a wide variety of missions, is nonexistent at the start but develops into an interesting story of intergalactic espionage and warfare.

What made the game stand out, even to this day, was the multi-player elements. The screen showed the viewpoints of 4 characters - you either controlled them all yourself, or could have a different person controlling each one. The depth of the gameplay is what catapulted the game to classic status. The level of cooperation needed, and using different players to complete different tasks, is something that all recent 3D games have missed.

Being a multi-player game, it was only a matter of time before you turned on the person who kept falling off the cliff, and shot him in the back. This soon turned into a full-scale death-match, even though the game didn't support them as such. You could also customise the character graphics to your heart's content. The variety of weapons, monsters, and locations make up for repetitive graphics, below-average writing, and scarce character interactions. 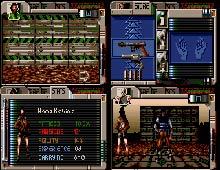