Decker is a fun cyberpunk/hacking simulation set in the 22nd century, based entirely on the Cyberspace portions of Wizkid's popular Shadowrun pen & paper RPG game. Similar to Neuromancer and Uplink, you play a hacker who specializes in breaking into corporate computer systems, for which you are handsomely paid. Of course, these corporations don?t idly sit by and allow you free run of their systems. The systems are guarded by Intrusion Countermeasure programs (ICE), which attempt to kick you out of the system, or possibly even kill you.

The basic equipment of a Decker is the cyberdeck, which plugs directly into your brain in order to allow you experience the full virtual reality world of the matrix. The game is divided into two sections: before "jacking in" to cyberspace, and within cyberspace. Before jacking in, you will review contracts available, choose which ones to accept, upgrade your cyberdeck and software inside, etc. While in the matrix, you will view the game from a 2D top-down view similar to RPGs of old, using programs to attempt to bypass the security measures of the corporate systems, or to crash them if all else fails. You start out unskilled, unknown, and underequipped, but as you gain experience, you will increase your skills, hardware, and reputation in order to combat more difficult and dangerous systems. The game is quite interesting in principle, but gets more and more repetitive as you go along, because most of the action is presented via static screens, and new jobs sound too similar to one another after a while. A fun game overall, but unfortunately not as good as Neuromancer and the more recent Uplink, two classics in the genre. 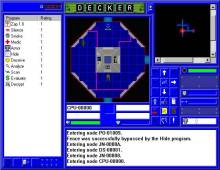