XOR - The Ultimate Maze Challenge is a superb fanmade remake of a classic puzzle game, created by Astral around 1986 and published by Logotron. The game appeared on just about every 8-bit system at the time, except the PC. Similar to Chip's Challenge in style, XOR is much more tricky than it appears. So tricky, in fact, that few gamers were able to solve the game back when it was released. Your goal is to escape each level, but not before collecting the required number of "happy masks" first. Your character on screen is represented by a shield, which you move around, collecting the masks while avoiding different kinds of falling obstacles. Some levels do require you to sacrifice one shield (i.e. one life) to solve the maze, so a careful planning is required. Similar to Chip's Challenge, each maze is filled with items that hinder or help your cause. Chicken always fall to the left, fish always fall downward, and dollies can be pushed to pave a way in any direction. Similar to Soko-Ban, doing things in the right order is crucial to finding a way out. There is no random element in the game - only neuron cells are required.

In addition to 15 levels in the game, but there is a "meta-puzzle" similar to the Sun map in Fool's Errand, although much simpler: after completing each level, you are given a letter. After completing all the levels, you have to decrypt the anagram to discover the true nature of XOR. The lack of time constraints of any kind makes XOR a great brainteaser: you have all the time in the world to work out a solution. Many mazes seem impossible to complete, and once you figure out a solution, you will feel a great sense of achievement - and respect for the designer for being so devious. If you like Chip's Challenge or reflex-free puzzlers in general, take a look at this excellent game that was hitherto unavailable for PC until now. Recommended! 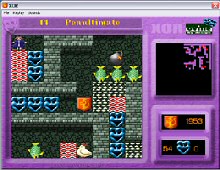