A Whole New Ball Game is a solid Windows remake of the Spectrum ZX game of the same name, designed by Pete Cook in 1988. The object of the game is to capture all yellow "Energy-Pills" on each level by rolling the ball over them. You cannot control the ball directly, but can change its course by placing mirrors to deflect the ball off of.

Your progress is hampered by teleporters, slime (which naturally multiplies, thereby blocking tiles you want to put mirrors on) and traps (which kill your ball). There are also special items on the level, such as speed-up and slow-down blocks which can either help or hinder depending on how shrewd you use them. On top of great gameplay and devious level designs, the game even includes a level designer you can use to make your own levels (this was present in the original game as well).

This Windows remake is a superb recreation of the original, with the same graphics and gameplay that made it a blast to play. Too bad it excludes the fun fractal tree generator program that shipped with Pete Cooke's release, but hey, we can't have everything. 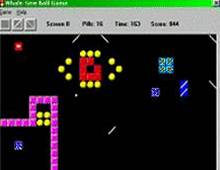