Wow, this game was such a huge hit back in 1988. on Commodore 64 computer! Well, back in 1988. there were no such games as today and anything new had great success. In this rather interesting puzzle game Your goal is simple - build a pipeline through a selected number of boxes so the water can flow. It might sound easy, but after first dozen of levels...

One nice little puzzle game. Pipe Mania is a very simply puzzle game where you have to put as many different pipes as possible together before the time runs out. Like in a game like Tetris the different pipes are showing up randomly and you can't decide which one you want to use. Of course this is the real challenge in the game and it forces you to be creative.

You get points for each extra pipe you add but you always have to make sure that each pipe is connected properly to the ones next to it as the water will otherwise not be able to flood on and then you will lose the game. There are several levels in the game and each of them gets tougher with different small changes to the area you can place your pipes at and the time available on the level. Like almost all other arcade puzzle games the game basis doesn't change much other than the game level.

What I really like is the two player mode. By selecting this two human players option will be on the same area and this way you have to make up for any errors the other player makes. But overall this mode is much more entertaining than one player mode. Overall Pipe Mania is a funny game and it's very easy to learn as well. Worth trying out.

Another nice Puzzle-Game - 1990 really was an excellent year for this genre! Simple concept, put the pieces together in a way that they fit - yeah, but of course you don't have the choice of what kind of piece you get - challenging game. You can bet that just that piece you need for your pipe won't come so you got to improvise to build it as long as possible before the water reaches the end - and the water keeps flowing no matter what you do. Panically screaming at it doesn't stop it for a second - tried it ;)

What more could you want to know? You like Puzzle-Games? Try this one - even a 2-player-mode is implemented: you and your friend are playing on the same board so that both got to suffer from the mistakes of the other one. Guaranteed to heat up boring parties.

A very addictive puzzle game, Pipe Mania is the European release of LucasFilm's original Pipe Dreams. The game idea wasn't new when it came out, but Pipe Mania executes the lay-random-tiles-to-form-a-pipe principle very well, and improves upon LucasFilm's version with better graphics and music. Your goal is to move and rotate pipes to connect to each other to transfer the water to a destination tile before time runs out. Some tiles have overlapping pipes, so the game becomes difficult very quickly as you must keep track of where the pipes really lead to. If you like Pipe Dreams or fast action/puzzle games such as Tetris in general, you'll love Pipe Mania. Recommended!

Make the longest pipe line by connecting the right pipes, but try not to waste too many pipes as you'll get point off your total score.

This game used to keep me occupied for hours. Going through the different pieces of the puzzle trying to build pipes before the goo got spilt everywhere.

The aim is to keep the goo from coming out the end until the timer runs out. If you want a good puzzle game, that can pose quite a challenge when you get up to the harder levels. As the levels increase the goo will start sooner, and you will be expected to keep it going for longer. The goo comes out a lot quicker and you have to work really hard to keep ahead of it. They start placing obstacles in the way, like bricks and walls etc. You can get bonus points for making the goo cross over itself using the + shaped pipes.

You should try this one out just for a bit of fun :) Everyone should be able to say that they have played this game. 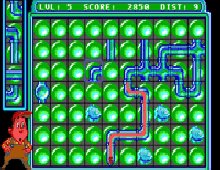