Ultimate Super Stack is an excellent sequel to Super Stack, itself one of the best freeware QBasic games ever made. The game is essentially a freeware remake of Kirby's Star Stacker, a Gameboy Color game by HAL Labs. The object of the game is simple: 'trap' as many stars as possible between two like objects, e.g. hourglasses and spellbooks. Depending on how you trap these stars, you can score extra points by forming combos like "Super Stacks," similar to Puyo Puyo.

The game has a lot of nice features, with a very polished look that makes it a far cry from typical amateur games. Many of the obstacles from the first game reappear in USS, but the game also boasts new ones, including glass blocks and triple speed rating. There are also new bonus items, such as the Super Stars that literally gives you a hand to crush all stars in its path. There are 55 levels in the game, including one tutorial, and three difficulty levels. You can even create your own custom game if you want. Unfortunately, the game has no 2-player option—something that's become a standard in Tetris-style games. Overall, though, Ultimate Super Stack is a pleasant puzzle diversion, and a surprisingly addictive game that will keep you glued to the screen, waiting for the next Super Star to appear. Highly recommended! 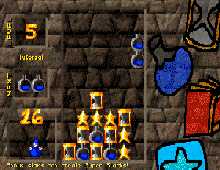