Ultimate Spin Doctor is an obscure Windows version of ClockWerx, an innovative puzzle gamer that was endorsed by Tetris father Alexei Pajitnov and published by Spectrum Holobyte in 1995. The game remains the same as ClockWerx, except a nice Windows-based interface, all-new tutorial levels, and some new levels at high difficulty. Your goal in the game is to maneuver a spinning clock hand from one part of a grid to a gateway that leads to the next level. Over 100 exciting play fields include such obstacles as enemy clock hands, oil globs and spikes. If you have played and finished ClockWerx, USD offers more devious levels to tax your brains. If you have never played ClockWerx, then this is the definitive version of a very addictive and original brainteaser that requires both reflexes and wit to succeed. Highly recommended. 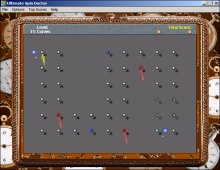